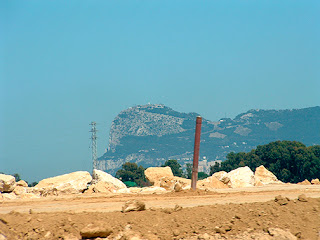 I love to shoot from angles that might be unusual. I was driving around Spain a while ago when I saw the Rock of Gibraltar from a different angle. It made me realize that while we all have an idea of what things look like, people who live near famous things see the good, the bad and the ugly. If I had been closer to the rock with a wider lens, I would have gotten a nice image of just the rock (I actually did later) but this is the view that the locals probably see more often.

Posted by Bill Truran Productions! at 10:45 AM No comments: