How to be a Grinch 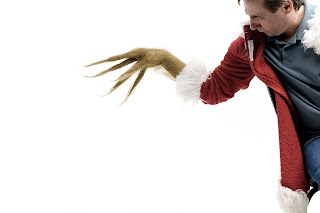 I was doing a shoot for Milkbone in California. There was a client, an art director and Gracie's (Max's) trainer but they were all women. We had never thought that we might need a male model to be the "Grinch". That's how I became it. I shot Gracie in various poses first and then, using the same light I slid on the net gloves with the long fingers and one of Jim Carrey's Grinch bathrobes, sat on a chair and leaned in. The trainer who had just completed the Grinch movie was kind enough to brush out the extra long fingers. My client was the one who actually pushed the camera button and took the pictures. What fun!
Posted by Bill Truran Productions! at 10:01 PM No comments: